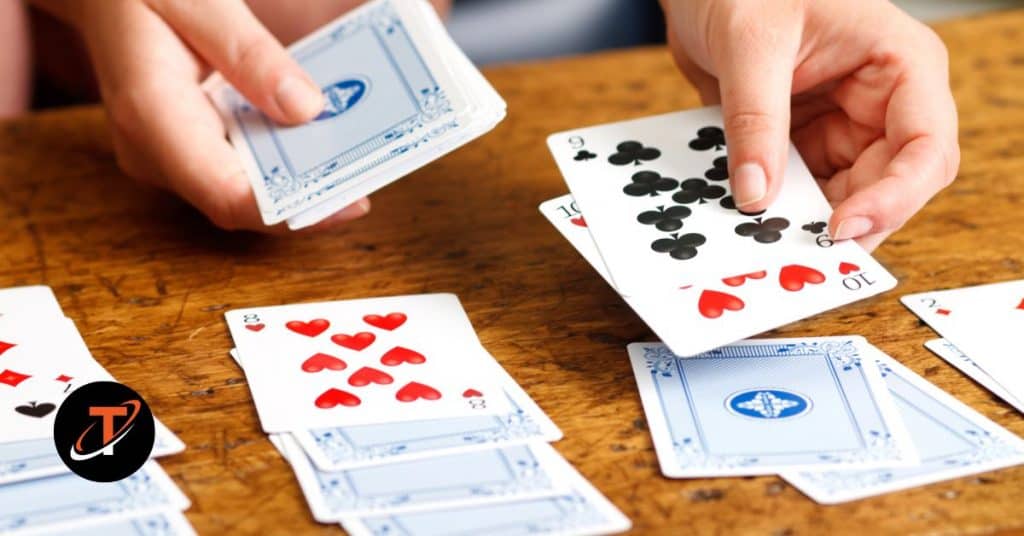 Solitaire is a free online game of skill where players take turns placing cards on the tableau. They are then sorted into suites and sequences of cards. The best free solitaire games for android & iOs include Klondike, FreeCell, Spider, Pyramid, and Canfield. Solitaire games are played primarily using one deck of 52 cards.

As mentioned, there are some solitaire game apps available in the Google Play Store. But not all of them are good. Here is a list of the 10 best solitaire games for Android.

If you love the classic game of solitaire, you’ll love the Solitaire App by MobilityWare. Not only does it recreate the simple fun of the classic game, but it also offers daily challenges that you can complete to unlock crowns and trophies. It even lets you compete against random players in multiplayer mode. What’s even better, it’s free to download and can be played on any smartphone or tablet.

The game is free to download, and it’s supported by in-app advertisements.

Although the game is free, it does have ads, but they aren’t too intrusive. Solitaire is an excellent game to relax with, and a great choice if you’re stuck in a long holiday line.

The app also has an online multiplayer mode, so you can compete with strangers and even friends. This way, you can engage with family and friends during the holiday season!

Spider Solitaire is a one-deck card game that can be played solo or against a computer opponent. The game is intended for multiple players, but one player can play. The game has 3 different game speeds to choose from, and an option to add special effects and sounds.

Although the game may seem complicated, it is easy to learn and can play quickly. This Solitaire game by MobilityWare (also available from Google Play) offers three variations of Spider Solitaire, along with an option for timed play.

Solitaire games are nothing new to the iPhone or Android user, but one game in particular, Spider Solitaire, has been given the full makeover treatment: a gorgeous 3D interface, new cards, and new game options keep the game fresh. This Spider Solitaire App by MobilityWare is essentially an upgraded version of the free Solitaire game that has existed on iOS for years. However, this version takes all the bells and whistles that Android users have enjoyed for years and brings it to an iOS user base.

The new version of Solitaire Collection, an iOS-only app, features over 200 solitaire games. The latest version adds new game modes, as well as a number of new card themes. Of particular note is the Endless Solitaire mode, which tracks your stats and your wins or losses. While Solitaire Collection isn’t a free game, it does have a reasonably priced in-app purchase to remove ads.

The Simple Solitaire Collection app is made for pro players. It is a 100 percent free game but there are some ads. You will get some features like AcesUp, Canfield, Forty&Eight, and FreeCell. You can also customize the game according to your need and adjust the difficulty per game.

Microsoft has completely redesigned its traditional Solitaire game for new users. The game has now beautiful graphics and different levels.

The Microsoft Solitaire Collection has 15 variations, each involving a different number of decks of cards. The objective is to play all 15 levels. The games range in difficulty, from “easy” to “hard,” so the more skilled you are, the better you’re likely to do. While the games can be played alone, you can also play against up to four of your friends, and you can play solo matches against “bots”; the bots are computer-controlled opponents.

You can easily install it on your Android phone.

Playing Solitaire is a timeless game that’s fun for people of all ages. And, it’s even better on a mobile device. The Solitaire Arena app lets you play 100+ free solitaire games literally anywhere you are. Download the app for free and try Solitaire Arena today. (The app is not available on Google Play yet, but you can find it at the App Store.)

This addictive and fun game can be played in single-player mode against the clock or against up to 4 players in online multiplayer. The goal is to clear all the cards from the table by forming “kings”, “queens”, and “ aces”. The game requires concentration to play and is meant to test your skills.

The Full Deck Solitaire app is a fun, free solitaire card game. By playing the solitaire card game, you can improve your concentration, hand-eye coordination, and problem-solving skills. The game is designed for both casual and serious players and-board game lovers alike. In addition to playing standard solitaire, there are 50 solitaire variations to choose from.

It’s available for free for Android and iOS users, and you can play it offline.

Tripeaks Solitaire is a true classic, and one of the very first solitaire card games to ever hit smartphones. It’s both simple and addictive, which explains why it has been able to stand the test of time and overcome the rise of the many other solitaire games available these days.

Tripeaks Solitaire is its name, and it comes to us courtesy of none other than Klondike—the classic card game that got the ball rolling on solitaire.

In TriPeaks Solitaire, three piles of cards are dealt on a tableau, and your goal is to clear the entire tableau by suit. The game is played in three phases. In the first phase, you move cards to the foundations, or “peaks,” in ascending suits.

Pyramid Solitaire Saga is a fun card game you can play on your iPhone or Android device. In this classic card game, your goal is to collect all the cards from the pyramid without letting any cards fall.

The aim of the game is to match 4 cards and get rid of them. The game is the same as many traditional solitaire games, only with the addition of a pyramid-shaped board.

Each game has a unique twist that is different from the original game. In Pyramid Solitaire Saga Pyramid, players must match cards of the same color to build a pyramid.

Solitaire is a classic card game that has been around since the 1950s. It’s usually played solitaire on a computer, but there are plenty of great Solitaire game apps for Android and iOS devices as well. Classic Solitaire Klondike is one of the best and most simple to play a solitaire games for Android.

It’s a great way to relax, unwind, and engage with your friends and family. And there’s more than one solitaire game to choose from, too. Solitaire, which is a different take on Klondike, and Spider, which features a deck of cards that spin when you play a card.

The classic card game Klondike is a classic two-player solitaire game. Klondike is played on a 3×4 grid of cards, and the goal is to remove all cards from the grid by forming stacks, which consist of 3 cards of the same rank. If a player manages to clear all the cards from the board, they win.

There are many other Solitaire games for Android and iOS but we have shared too 10 best apps in 2022. You can use any app that you like as the main goal of these apps is to allow users to play the Solitaire game for free.