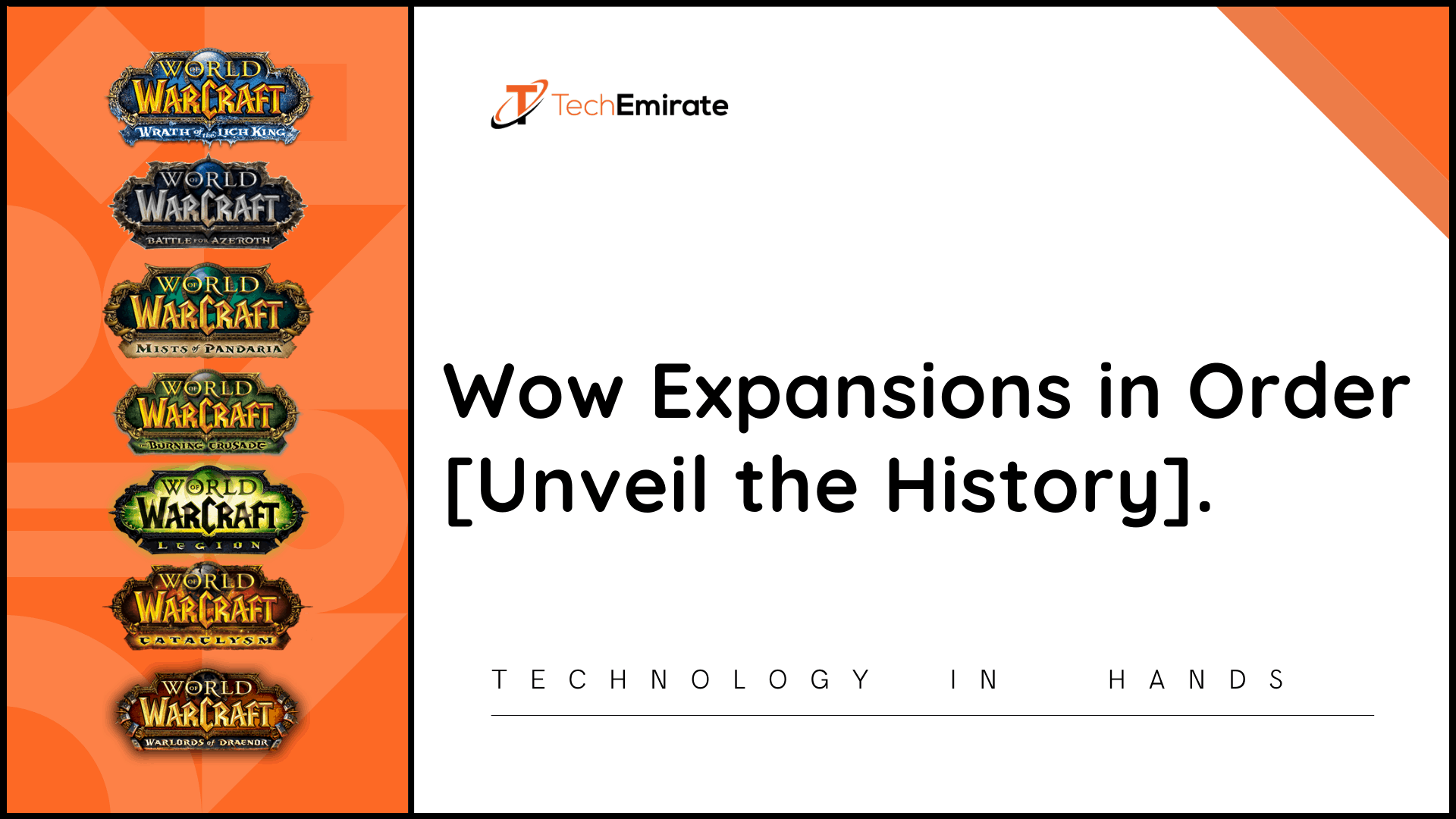 There is no doubt that world of warcraft is a renowned multiplayer game. It comes with a grand history. It has become fifteen years since this game was first released in NA.

WoW is still the best choice for gamers. Players around the world really love this game. This is the main reason why they celebrate every separate release of it.

Here, you need to remember that Blizzard was released on separate servers along with the famous Vanilla. Since the classic release was so popular, every new phase is considered a grand event.

What Are the Best WoW Expansions in Order?

The Burning Crusade was introduced in the year of 2007. It was the first expansion of this amazing game. BC was released throughout the world in the month of January 2007.

There were various major implementations that could be seen on it such as flying mounts. Moreover, there were two races also added i.e. Draenei and Blood Elves. Players could play these races in all classes even with a single fraction.

The burning crusade blood was certainly a great expansion. Obviously, players love unveiling new features of a game. This might be a reason behind the enormous popularity of its classic features.

One of the key reasons behind the enormous success of the first wow expansions in order was that players can level cap to about 70 levels. Obviously, it’s a great option for players to enjoy this game.

In the year 2008, World of Warcraft came with a new

expansion called the wrath of the lich king. This expansion was introduced in the month of November. The great part of this wow expansion was that players even today know about Arthas.

Whether you have ever played the WOW or not, you would surely know about Arthas. Here one point should be noted the upcoming most awaited shadowlands are also connected to the famous ice throne.

With the new expansion, Northrend can be seen as an added feature of the game. Players could also be able to explore the advantages of Wintergrasp, dungeons, and PVP zones. The best part of this expansion is that even today players can enjoy raid rewards.

However, there are various new features that could be seen with new wow expansions in order, but the key reason behind the popularity of its Death Knight. Yes, by adding death knight, the world of warcraft made the world go mad.

This time level cap was officially raised up to 80 levels. It means that players have more fun exploring.

Having logically concluded the lore given in WoW, the famous Blizzard came with a new feature called Cataclysm in the game. This wow expansion in order was introduced in the month of December 2010. Here, you should know that all zones from the famous classics have officially been altered due to the new cataclysm.

With this new expansion, players could be able to encounter a few new zones such as PVP, Mount Hyjal and Tol Barad. There were also two races available with the new expansion. These were Goblins and Worgen. One is for horde and the second one is for the alliance.

This time the level cap was successfully raised to about 85 levels. Obviously, now players have plenty of fish to hunt.

One of the most interesting wow expansions in order was mists of Pandaria. It was introduced in the year of 2012. With the new expansion, the game got lots of new features, specs, and functionalities.

Some of the tweaks were called Class Monk, Race Pandaren, and Continent Pandaria. Apart from that players could also find mini-dungeons known as Scenarios. It was a specific type of zone that can be used by three individuals.

With the help of the new Battle Pet System, players can be able to enjoy the game more than ever before. This expansion came with a level cap of about 90 levels. It means that players could be able to make great things out of it.

“Warlords of Draenor” is certainly a restating system for warcraft. This add-on was introduced in the month of November 2014. This time the game came with new tweaks, updates, and expansion features.

The new feature i.e. separate zone called Garrison could easily be upgraded and developed by players. With the new implementations, the wow expansions are in order i.e. Warlords of Draenor is certainly a distinct one.

It came with new scenarios that make the game more interesting than ever before. There were graphics updates, Ashran PVP, Skirmishes, and other tweaks.

Now, with this add-on, players could able to find a level cap of up to 100 levels. Of course, it was a great achievement.

In August 2016, Legion came as the new add-on.  Now, with this wow expansion in order, multiple things had been included in the game. Some of the key new tweaks are including Broken Isles, Daemon Hunters, Artifact Weapons, and class hall.

The best part of introducing this one of the best wow expansions in order was its PvP system. This new system helped players to exchange their honor points. It means that you don’t need to buy honor points as PVP gear could be used as a reward option.

This new update came with multiple new races in given BFA. Now, the level cap was raised to about 110 levels. Of course, it was a great expansion in order for World of Warcraft.

In the year 2018, a new expansion came into existence called the battle for Azeroth. This new option came to help players find lots of unique things such as Void Elf, Highmountain Tauren, Lightforged Draenei, and nightborne.

Shadowlands came into existence in the year 2020. It is considered one of the best wow expansions in order. It introduced various new zones.

Now, you can enjoy Venthyr, Night Fae, Necrolords, and Kyrian. The best part of this new update was that it came with a new leveling system.